I’d heard Photography People say “rule of thirds” long before I learned what it actually was, and it always sounded so mysterious. A secret rule that photographers use to make Art instead of Snapshots! I avoided learning about it, because I hate rules, but when I did, I actually found it very useful and now I use it all the time.

The Rule of Thirds isn’t really a rule. It’s more of a guideline. I think most people would agree with that, even people who don’t have my hard-line aversion to rules. It’s one of many possible options for solving a particular problem. So, I’m going to call it the Tool of Thirds.

The problem the Tool of Thirds seeks to solve is this: “Where should I put my center of interest?”

If you’re not already familiar with the term, composition is the arrangement of elements in your artwork. It’s a major aspect of photography, painting, drawing, and any other visual medium. “Good composition” generally means any arrangement that keeps people looking at your artwork for longer.

Where should I put my center of interest?

So, where’s a more dynamic place to put the center of interest?

Short Answer: Not the horizontal middle. Not the vertical middle. Anywhere else.

Okay, so what actually is the Tool/Rule of Thirds?

Divide your paper into thirds, horizontally and vertically. You will come up with four intersection points. 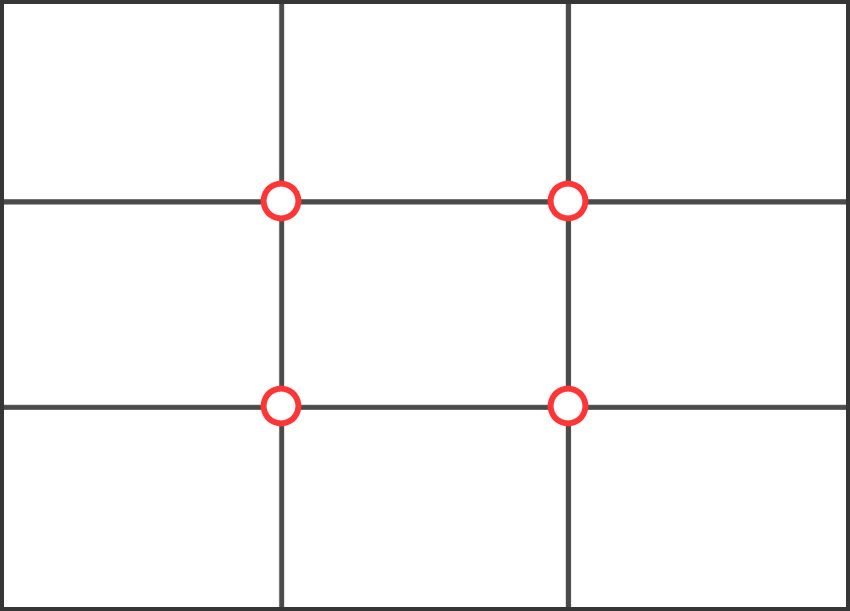 Image from PhotographySupply.com since I’m too lazy to make my own

Place your center of interest at any of those intersection points. 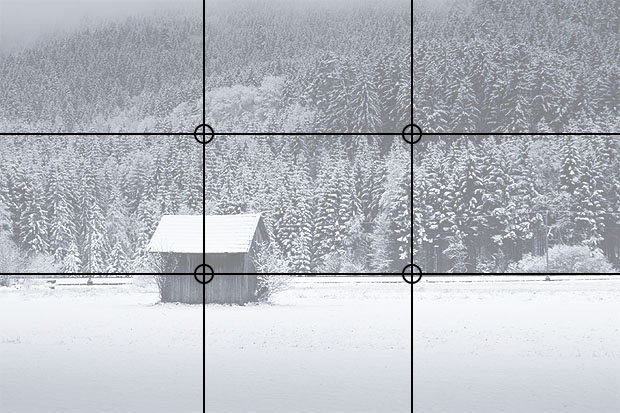 Image from Photography Mad. In this landscape, the center of interest is the small house. which is placed at one of the “rule of thirds” intersection points.

Many cameras, phones, and software have “rule of thirds” grids built-in so you can easily see these intersection points when you’re taking a picture or editing. For example, in Google Photos, when you’re cropping, they automatically pop up.

Screenshot of me editing my first Northern Lights watercolor in Google Photos, to place the brightest point at one of the intersection points and the horizon line along one of the lines.

Actually using the tool in watercolor

So when you’re actually composing your painting – not editing the painting after the fact – how can you apply the tool? Do you have to draw gridlines on your paper?

My general answer to that is “absolutely not.” I’m too lazy to draw gridlines and anyway, drawing anything on your watercolor paper – especially something as harsh as a ruled line – carries with it the risk that it will appear in your final painting, no matter how hard you try to erase it.

My methods for incorporating the Tool of Thirds in composition are any of the following:

Alternatives to the Tool of Thirds

The “Not Here” Windowpane

Another, simpler way I have seen this same idea described is in Powerful Watercolor Landscapes by Catherine Gill and Beth Means, in their discussion of where the place the “what.” (They call the focal point the “what” as in “what is this a painting of?”) There, they just draw lines across the vertical and horizontal middle of the page and say: Don’t put it there. Anywhere else is fine.

This is the exact same idea as the Tool of Thirds, which simply guides you to place your center of interest in the middle of those four panes.

I like this way of thinking about it better because it feels more lenient to me. It is also easier for me to think in halves and quarters than thirds.

There’s nothing particularly special or magic about one-third of the way into the page, and some people argue that it’s effective only because it approximates the Golden Mean. This is a different “grid” that’s actually a spiral based on the Fibonacci sequence. The cool thing about this spiral is that it’s frequently found in nature (for example, snails’ shells.)

You can orient the spiral any way you want in the frame, but your center of interest would be at the smallest point with the most lines. 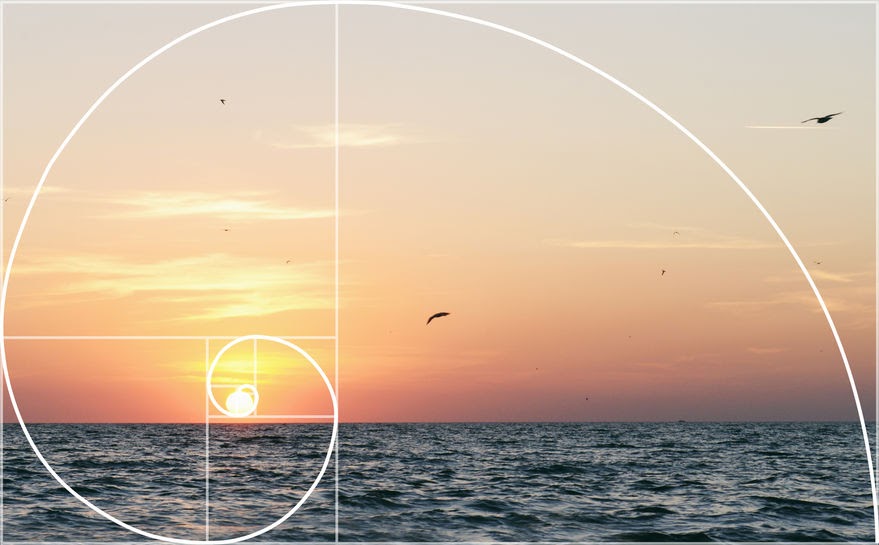 I like the idea of the golden mean, but in practice I find it hard to use because I can’t quickly eyeball it or draw it freehand.

Just Putting It In the Middle

Just because “right in the middle” is most people’s first instinct doesn’t mean it’s always wrong. While pushing yourself to consider other placements can help you come up with fun, surprising new compositions, sometimes an image just calls out to be totally balanced and to have the center of interest in the middle.

Photo by Arnaud Mesureur on Unsplash. The leading lines of the tree trunks all point forward the exact middle of the frame.

This is why I think of this as a tool, not actually a rule. You aren’t “breaking the rules” by putting your center of interest in the middle, or at another point. You are simply using a different tool instead.

If you’re unsure where to place your center of interest, however, the Tool of Thirds can be an easy shortcut that gives you Pretty Good results most of the time.