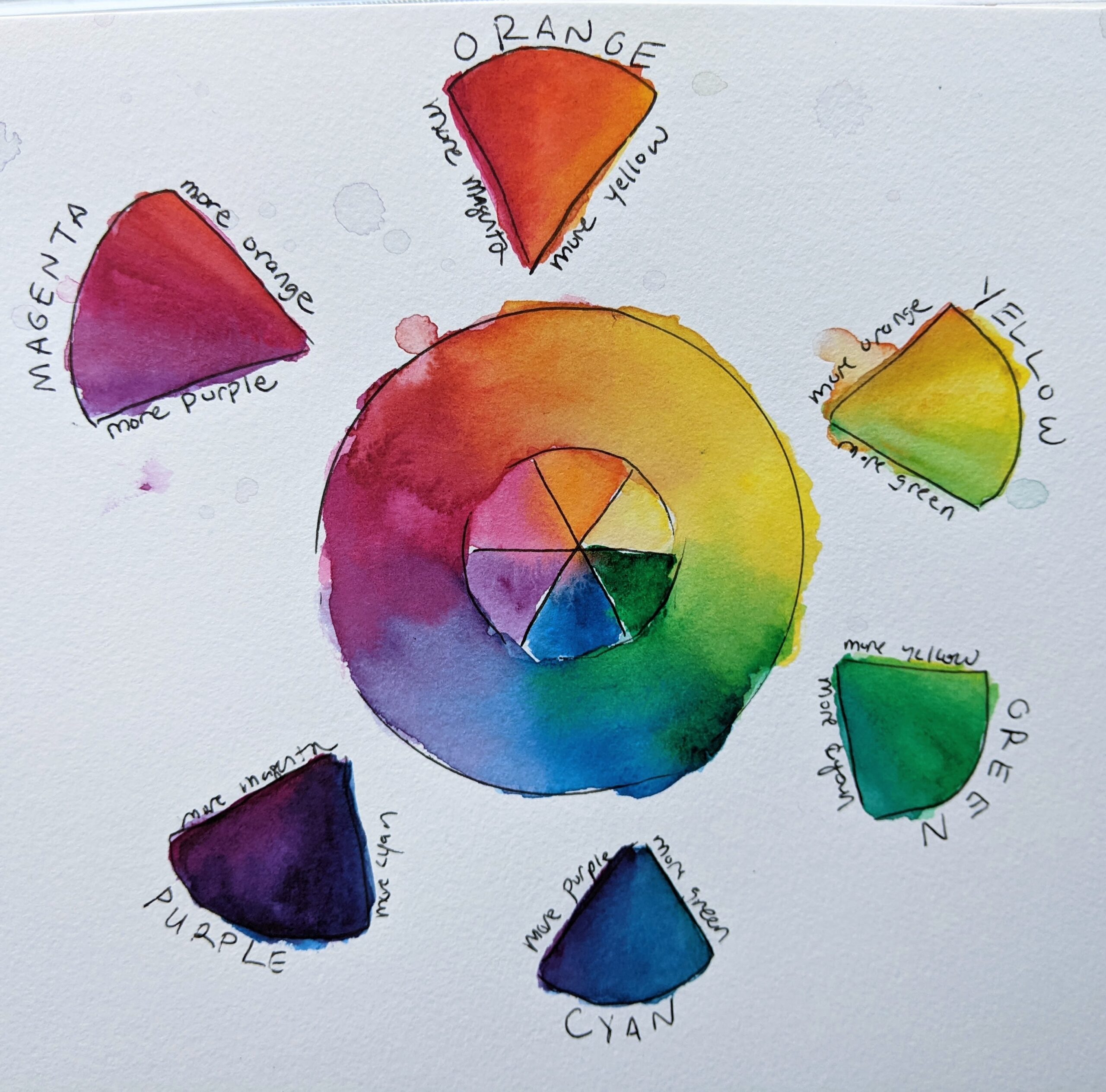 I’m just going to say it!

Dividing colors into “warm” and “cool” categories is a common way to organize them and think about color theory. (It’s a scheme I use to organize my dot card swatches, for example.) But it never really made a lot of sense to me, and now I know why. It’s inherently confusing!

Think about a color wheel with six colors: the primaries (magenta, yellow, and cyan), and the secondaries (the colors made by mixing them: magenta + yellow = orange, yellow + cyan = green, cyan + magenta = purple).

You’ve probably seen this before; it feels pretty intuitive, right?

Take a second to notice where the three primaries fall here. Since there are only three of them, they are really divided unevenly between warm and cool; two of them (magenta and yellow) are warm, and only cyan is cool. This will cause problems later.

Of course, the color wheel is really a spectrum. We just arbitrarily divide it into six wedges by convention. You could divide it into any number of wedges. Within each wedge, there will also be a spectrum of colors. For example, the “purple” wedge covers from a blue-purple to a magenta-purple. The “magenta” wedge really covers from a purple-magenta to a red-magenta. And so on.

When you talk about a “cool” or a “warm” version of color, you are talking about where it falls along its color wheel wedge: more toward the cool side or the warm side? A “cool” purple is more blue, and a “warm” purple is more magenta.

The problem is that this system only works for the four color wheel slices along the warm-cool divide. For orange and cyan, it doesn’t work at all.

What’s a warmer cyan: one with more magenta in it (a purple-blue), or one with more green in it (a turquoise)? You could make the argument for either, since both magenta and green are warmer than cyan. By convention, purple-blues are typically called “warm” and green-blues are typically called “cool,” but this doesn’t feel intuitive or logical to me; I just memorized it.

Orange is another condundrum. If this system works, you should be able to talk about any color having a “warm” or a “cool” version. But no matter which direction you go for orange – more red or more yellow – you are still warm. There is no such thing as cool orange.

These are the kinds of problems that happen when you try to impose an arbitrary binary on a trinary system.

The arbitrary warm and cool system results in some major issues.

I tried all sorts of ways of painting oranges, for example, and found that while warm red and warm yellow worked best for creating a vibrant orange (what you’d expect), all the other combinations looked pretty similar (and not too bad really).

Meanwhile, while I ought to have been able to paint a warm purple by combining warm red and warm blue, I found that any combination with warm red was terrible and just turned brown.

Through experimentation, I landed on the following “rules”, none of which seemed to have any unifying factor:

A different rule clicked, however, once I read this article on color temperature from the small batch paint company Greenleaf & Blueberry. Instead of thinking about colors in terms of “warm” or “cool,” think about which color wheel neighbor they tend toward.

And now the color mixing rules make total sense and are easy to remember:

Isn’t that so much simpler?

A common way of designing a minimalist, six-color watercolor palette is called “split primary”: a warm and cool version of each primary color. For example:

The Daniel Smith Essentials set, which I started off with, contains one paint from each category, for example. This is the system I originally advised in How to Build a Watercolor Palette from the Ground Up (I’ve since changed it).

This system has some conceptual problems. Aside from the issues with “cool” and “warm” blue identified above:

The system also has some practical problems:

Switching to the Secondary Palette

I had an “ah-ha” moment when reading Bruce MacEvoy’s takedown of the split primary palette and proposed solution: the secondary palette. The secondary palette is an alternative way of designing a six-color minimalist or starter palette that is a lot more like the six-step color wheel I created above.

As usual, you begin with the real primaries (magenta, yellow, and cyan), but your next three colors – instead of “warm versions” of those – are the secondary colors in between them. The idea is to reduce the amount of steps across the color wheel you need to cover to mix the color you want.

Here’s a look at the slots and some options for them in this system:

One thing to immediately notice about this system is that it’s functionally super similar to the split primary system! It just switches the cool yellow to a middle yellow and swaps out relatively useless orange-yellow for a super-useful green. It solves all the functional problems of the split primary palette while also working better theoretically because it is no longer beholden to the fake idea of warm and cool.

What Is the Cool and Warm Binary Good For?

The “cool and warm” framework isn’t totally useless. There are useful some things you can do with it.

Warm colors tend to be more energetic and to evoke more stimulating, “hot” emotions. My first associations with warm colors are positive: happiness, optimism, joy, passion. But there are also negative warm emotions, like anger, hostility, and fear. Cool colors, by contrast, tend to be calmer. I associate cool colors with sadness and depression, but also with peace and relaxation.

Creating a Sense of Depth

The side of an object that’s closer to the light source (e.g. the sun) will tend to be warmer-colored in addition to being lighter in value, while shaded sides will tend to be bluer.

Cool and warm colors can be used effectively to create various effects in paintings, and it’s a useful dichotomy to know about. But when it comes to grouping paints or theorizing about mixes, it does more harm than good. From now on, on the blog, when I talk about different shades of a color, I will try to be specific about what I mean in terms of the color bias.